This term is very often used to identify a type of treatment aimed at fighting different types of cancer, including leukemia, the cancer of the bone marrow and blood. There still remains some confusion about what chemotherapy exactly is.
This article aims at clarifying what chemotherapy is and what it is for, which drugs it is composed of, how they work and what are their main side effects, and finally at giving some advice on how to effectively manage these side effects.
As I am used to do on this ‘blog’ side of Beat Leukemia, I wrote this article drawing from my personal experience, and what I saw happen to other patients very often. I hence invite you readers to answer leaving comments at the end of the page, especially if you know of other side effects and how to deal with them.
Chemotherapy is a group of drugs used to destroy cancer cells, according to well defined protocols for each tumor type, and adapted to the single patient alongside parameters such as age, weight, and general health conditions.
Chemotherapy drugs can be given in different forms, and precisely:
- Intravenous, through a peripheric or central venous catheter (CVC);
- By means of injections, in muscles or below skin;
- Orally, with pills. 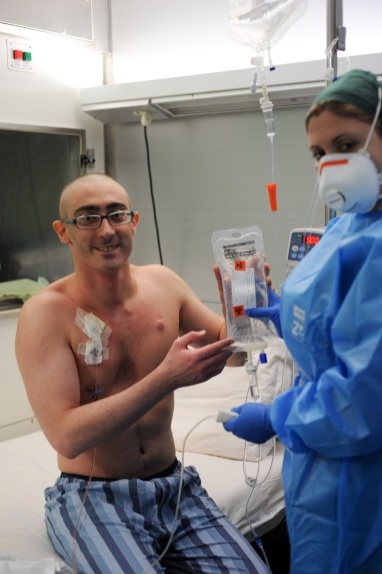 These drugs attack and destroy the cancer cells during several phases of their development. Unfortunately however, they are not able to distinguish cancer cells from the healthy ones and this large scale bombing gives place to a number of side effects for the patient.
Every day our body’s cells, especially “rapid replications cells”, die and are substituted by new ones that are continuously produced in the lower layers. It is the case for instance of the skin, or hair. Chemotherapy has the effect of temporarily blocking the production of new cells, so once the superficial ones are dead, there are no new ones ready to replace them. These leads to the skin peeling off (in the case of skin), something similar to a sunburn. When this happens inside the oral cavity, this is called “mucositis” and can cause strong pain in the mouth and throat, making it impossible to swallow any food or beverage. Mucositis often affects also the stomach, causing nausea, vomit and loss of appetite, the intestine causing diarrhea, and the end of the intestine, making it possible for hemorrhoids to appear.
Which of these effects will appear and with what intensity depends on several factors such as the dose of chemotherapy taken, the type of drug used or the number of cycles already done before. Every patient can anyway react in a different way. The side effects of chemotherapy tend to accumulate and get heavier, and it takes time before they are eliminated by the body.
Concerning nausea, there exist today many very effective anti-nausea drugs that are given to the patient right before the chemotherapy or if necessary. The chemotherapy itself has been modified in time to reduce this side effect as possible. It can still help to eat light before or during the infusion of the drugs, and try to eat smaller quantities, more often.
Intestine issues can be managed with anti-diarrhea drugs. Concerning hemorrhoids instead it can be useful to ask for the visit of a specialist that can suggest a therapy to prevent them to be started before the chemotherapy.
The oral cavity is interested when the chemotherapy is very intense. Nothing can be done to cure mucositis, but it is possible to remove the pain with pain killers, and prevent complications such as bacterial infections with a careful oral hygiene, matching the use of a soft toothbrush with an effective combination of different mouthwash.
Chemotherapy also has side effects on the reproductive system. Nothing to do with the possibility of having sex, which must still be protected with the use of condoms, and matched with a careful hygiene of the body, particularly the genital area. Chemotherapy can instead compromise, temporarily or permanently, fertility, that is the ability to reproduce. It is hence important to get informed with your doctor, if the seriousness or urgency of the disease allow for it, BEFORE starting treatment, about the possibility to preserve a sample of sperm or ovules with the methods that are available today.